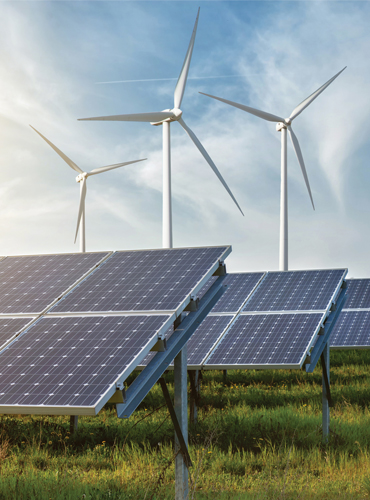 Given the adverse weather conditions endured by large parts of the country over the winter, it may come as a surprise to some that the UK's renewable energy industry has experienced a bit of a boom.

The UK currently generates around 4.2% of its energy from renewable sources such as solar panels installed on the roofs of residential and commercial buildings, plus wind and solar farms. This may not sound much, but in 2004, that figure stood at just 1.2%, indicating a 250% increase.

The Government was set a target by the EU that 15% of all the UK's energy is derived from renewable sources by 2020. To achieve this, they have been offering large subsidies to energy companies under their 'Renewable Obligation' scheme, which led to a boom in the industry. However, the Energy Minister, Greg Barker, admitted recently that far more projects have been built than expected, and announced that the scheme would be scaled back by 2015.

In the meantime, however, dozens of purpose built solar and wind farms have popped up across the country, as companies look to 'make hay while the sun shines', and take advantage of the subsidies while they still can. In addition, these farms are being bought and sold by developers to investors, who are looking to benefit from the income generated by these sites.

Inevitably, this increased activity means that conveyancing professionals are being called upon to act on behalf of developers looking to acquire land to build new farms, or to purchase existing ones. As a result, solicitors' due diligence is uncovering title defects that need addressing before a transaction can be completed.

Consequently, we've seen a rise in the number of requests to provide cover for solar or wind farm transactions, often involving especially relevant issues such as restrictive covenants, lack of rights of way or third party rights and easements, including mining and mineral rights.

These title defects are not unusual, but because of the intended use of the land, we often have to create bespoke policies, and sometimes provide extra cover for service or utility providers. These policies may include abortive installation costs, or the cost of dismantling equipment and restoring the land back to its previous condition if a claim prevents their use.

With the UK still well short of the Government's renewable energy target, it's likely that in spite of the subsidy cuts, this developing industry will continue to present new challenges to the conveyancing profession. One thing you can count on, is that however much the market changes, we will adapt our policies or create new ones to match your customers' needs.

Back
Bring me sunshine! The Chairman's view A glimmer of light