Duncan isn’t the only face we’d like to introduce you to in this issue of intouch. Meet the Countrywide FastTrack team; the people you speak to when you want an immediate quote over the phone. 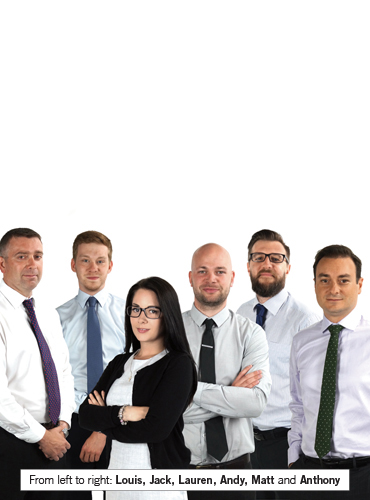 It’s a fast-paced environment and an average day will see them deal with up to 200 enquiries. On the odd occasion when your case is a little more complex and they can’t give you a quote over the phone straightaway, you’ll still receive one by email within 15 minutes.

It takes a lot of expertise to assess a risk in such a short space of time, but there’s more to our current FastTrack team than their underwriting talents, so we thought you’d appreciate knowing a little more about them the next time you call.

Louis is used to making tough decisions as he acts as a football referee in his spare time. “Refereeing is similar to working in the FastTrack team because you need to be a quick thinker and be ready to react to the unexpected.” Louis has promised not to blow his whistle when you call him with an enquiry.

Ask Matt what he’s having for dinner, and you’ll learn he’s a creature of habit. “Fridays are fish and chip days.” Speaking of habits, Matt is consistently friendly to everyone he speaks to. “I like getting to know the solicitors who call in regularly and building a good rapport with them.”

Jack is the newest member of the team, and the rigorous training that all of our underwriters receive is still fresh in his mind. “There’s so much variety in the enquiries we see in FastTrack. Sometimes they’re incredibly complex, and occasionally simply bizarre.” That says a lot given that Jack used to perform with a dance company while dressed as a crocodile.

Lauren is the team’s resident animal lover. “I haven’t eaten meat in over 20 years, and last Summer I rescued a baby seagull from the office car park”. She’s just as kind when it comes to our customers. “It’s nice to speak to our customers regularly and I enjoy helping them when they need a quote in a hurry.”

Don’t tell Andy to take a running jump (not that you would); he was once ranked 6th in England for the long jump! These days he’s a lot more grounded. “Being part of the FastTrack team brings new challenges every day, which helps motivates me.” (P.S. Ask him which famous athlete he competed alongside!)

Anthony came to us from the United States and brought some of that renowned American customer service with him. It also explains why he keeps talking about zip codes instead of post codes! “My team mates in FastTrack really helped me settle in when I joined Countrywide; now it feels like home.”

Next time you need an immediate quote over the phone, why not speak to a member of our experienced FastTrack team on 01603 617617?

Back
Insight: pre-planning ahead One policy, two claims Introducing a familiar face